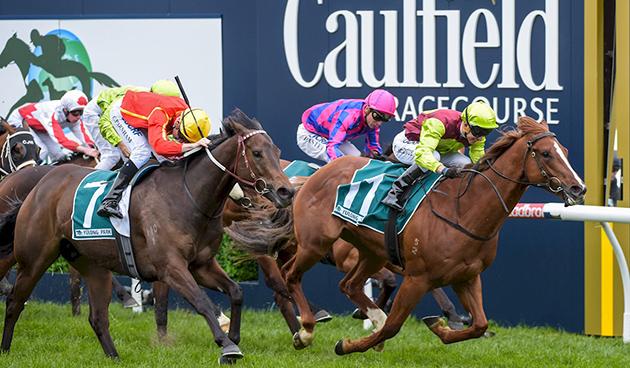 Bon Aurum graduated to become a Group 1-winning entire on Saturday at Caulfield, the in-form galloper coming from midfield as he does to win the Sir Rupert Clarke Stakes.

Bon Aurum a son the sire BON HOFFA becomes the 1st son a a Rupert Clarke winner to win the event. Bon Hoffa was purchased and raced by Ken King Thoroughbreds and went on to win the 2007 G1 edition of the race. Ken King retained an interest in Bon Hoffa when he went to stud and now has a G1 winning son by him in 2016.

Last year on this day, Bon Aurum won the Caulfield Guineas Prelude but was unable to progress to the 1600m of the Caulfield Guineas as he struggled home to finish ninth. But Maher said 12 months down the track, he is likely to give the galloper another chance at the mile in the Group 1 Toorak Handicap in two weeks.

“He’s going so well that I think he’s worth another chance at the mile,” Maher said.

Kerrin McEvoy cut ties with Godolphin/Darley almost two years to the day to Saturday’s success, which saw him make it three-straight Melbourne springs with a Group 1 victory as a Sydney-based freelancer.